It’s an interesting morning in the bond market – at least for those of us who are interested in both general rate dynamics and the movement of MBS. The general momentum is pretty boring. 10-year yields, for example, simply tend to rise in a linear fashion after hitting surprisingly low yields on Wednesday afternoon. If there seems to be an additional urgency behind this massive sell-off, it is more easily explained by the obvious urgency behind the European massive sell-off.

Meanwhile, MBS are apparently underperforming, but appearances can be deceptive. Let’s start by asking the loan officers a question. On average, how long has it been since your last refi client got the loan you’re about to pay off? There is a good chance that this number is nowhere nearly 10 years (and most of the time since covid, nowhere close to 5 years). But over time, an average emerges between 5 and 10 years.

Obviously, the recent average would be much less than 5 years, we will therefore see more correlation between 5-year Treasury bills and MBS than normal. It doesn’t matter when the yield curve (the difference between longer-term and shorter-term Treasuries) doesn’t change too quickly. For now, however, the yield curve has been volatile. 5-year T-bills generally fare very poorly compared to 10-year T-bills. With MBS having a duration that is more like 5-year T-bills, we shouldn’t be surprised to see an underperformance against the 10-year. Even then, it’s pretty minimal in context. Not only that, but MBS definitely outperforms over the 5 year old.

The graph shows the two points of comparison. Each line is the difference between the current yield of the MBS coupon (theoretical yield of an MBS coupon always valued at 100-00). It is not important to understand what “current coupon” means, just that it is a way to standardize the notion of “yield” for MBS so that we can more easily compare it to Treasury yields. 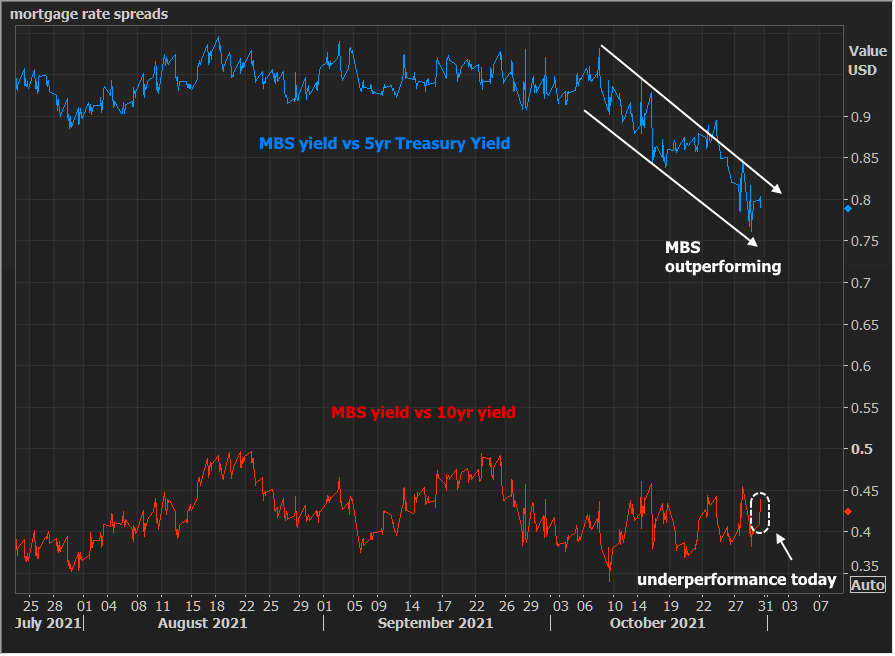 Prices shown below are delayed, please note the time stamp at the bottom. Real-time pricing is available through MBS Live.