A huge week in terms of data. The Fed pushed rates 75 basis points higher and everyone cheered. Stock markets have rallied strongly, a curious statement but here goes. We noted that the previous 75 basis point hike in June ended in a strong sell-off, so why the difference this time? Well, as we often say, the market decides what it wants to do and then shapes the narrative around that outcome. We were told the Fed turned dovish because the market wanted and needed to rally. This was the path of least resistance and maximum pain for investors. The Fed just dropped its advice, it didn’t really go down well.

The US GDP then came and added to the dovish attitude. More bad news, the United States is in a recession, but the stock market immediately starts to rally on this so-called bad news. Why? Because he wanted to. Falling bond yields helped high-risk sectors to advance and from there the only remaining hurdle was earnings. But Apple and Amazon have both held their end of the market and so here we are at the end of the week up around 5%. True or false, you decide. Currently, the market is pricing in a very optimistic configuration in our view. A drop in inflation from nearly 9% to 3% in 18 months is unprecedented and quite frankly highly unlikely in our view. We are not alone in our opinion and have good company!

“Jay Powell said things that, to be frank, were analytically indefensible. It is inconceivable that a 2.5% interest rate, in an inflating economy like this, would be close to neutral:” Larry Summers https://t.co/s13UJpGvCh

But don’t fight the Fed and flow is the mantra to live by, so rally on the guys!

Earnings season is now over with big tech, banks and oil majors on the sidelines. This leaves smaller fish ahead, which shouldn’t disturb the bullish apple basket too much. We expect volatility to remain elevated as the bond market seeks to determine exactly where it should set year-end rates. Bond volatility means equity volumes will remain high, so expect larger swings in PnL. But we’ve all gotten a little too pessimistic about this earnings season, including your author. We did not reach the level of washout that many expected. Maybe it comes in Q3 or maybe it doesn’t come at all. But already Wall Street has cut the 2023 S&P 500 EPS consensus from $250 to $243 during earnings season. Maintaining a current forward P/E of 17 here means a move from 4,250 to 4,131 for the S&P forward forecast. Small but stable and probably more to come.

Share price reactions to profit losses in SPX are now the mildest on our record. Clearly sentiment has turned too bearish ahead of this earnings season. pic.twitter.com/gvZSQ3LTtx

We noted the underweight in the latest fund manager surveys as well as the weak sentiment in the AAII and Bull and Bear surveys. All this helped to set up the rally. Fund managers and especially hedge funds need a strong quarter and second half to stem redemptions in the second half. They’ll be betting big on beat tech names and it’s no surprise that this is already happening.

The price reactions show us that silver is entering the years when the stock markets are the biggest losers after the initial downtrend that followed the BPA failures. pic.twitter.com/VRMgAQon4j

Adding to the rally was the trend reversal following CTA programs that closed short bets.

Here’s a technical reason for the recent stock market rally: quants are closing short positions at a dramatic time. https://t.co/VGqvwos7FY

The only chart that matters going forward is this one, the fed funds futures for December 2022 (bar chart) and December 2023 (line). Current pricing for aggressive rate cuts in 2023. Optimistic. If that changes, stocks will quickly revalue. If the spread narrows and/or rises, it’s time to exit the risk.

We know you all love this one and we can definitely expect some great soundbites from CEO Adam Aron to his AMC monkeys. Attendance remains strong with the summer blockbuster season going well, which should lead to an optimistic report and strong revenue. Trouble is further down the road, but with financial conditions easing, expect riskier assets to rally, pushing AMC higher next week. 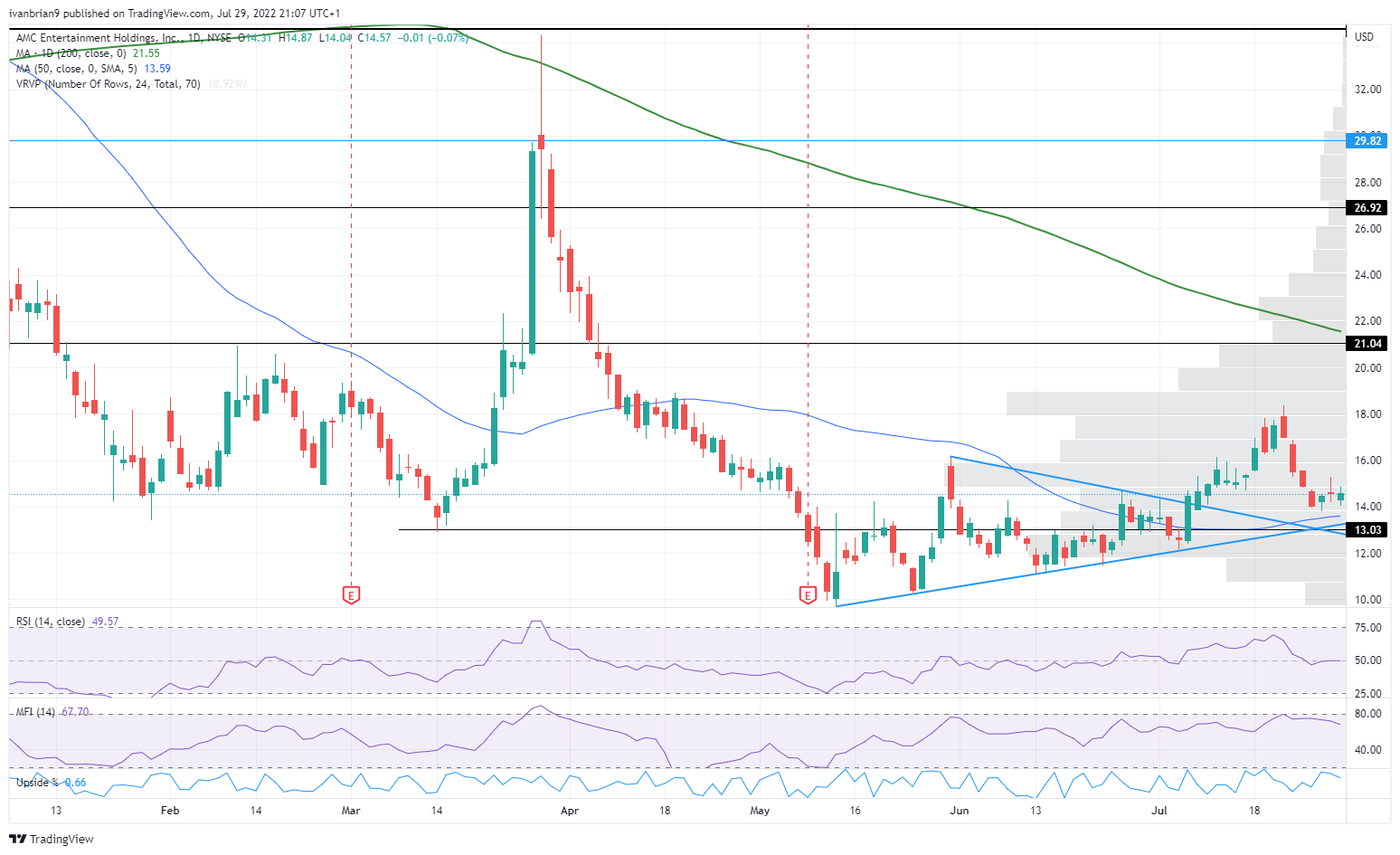 The gap at $401 was finally closed and $415 is now beckoning. Volume is starting to rise up there, so this move may start to slow down, but we remain bullish. 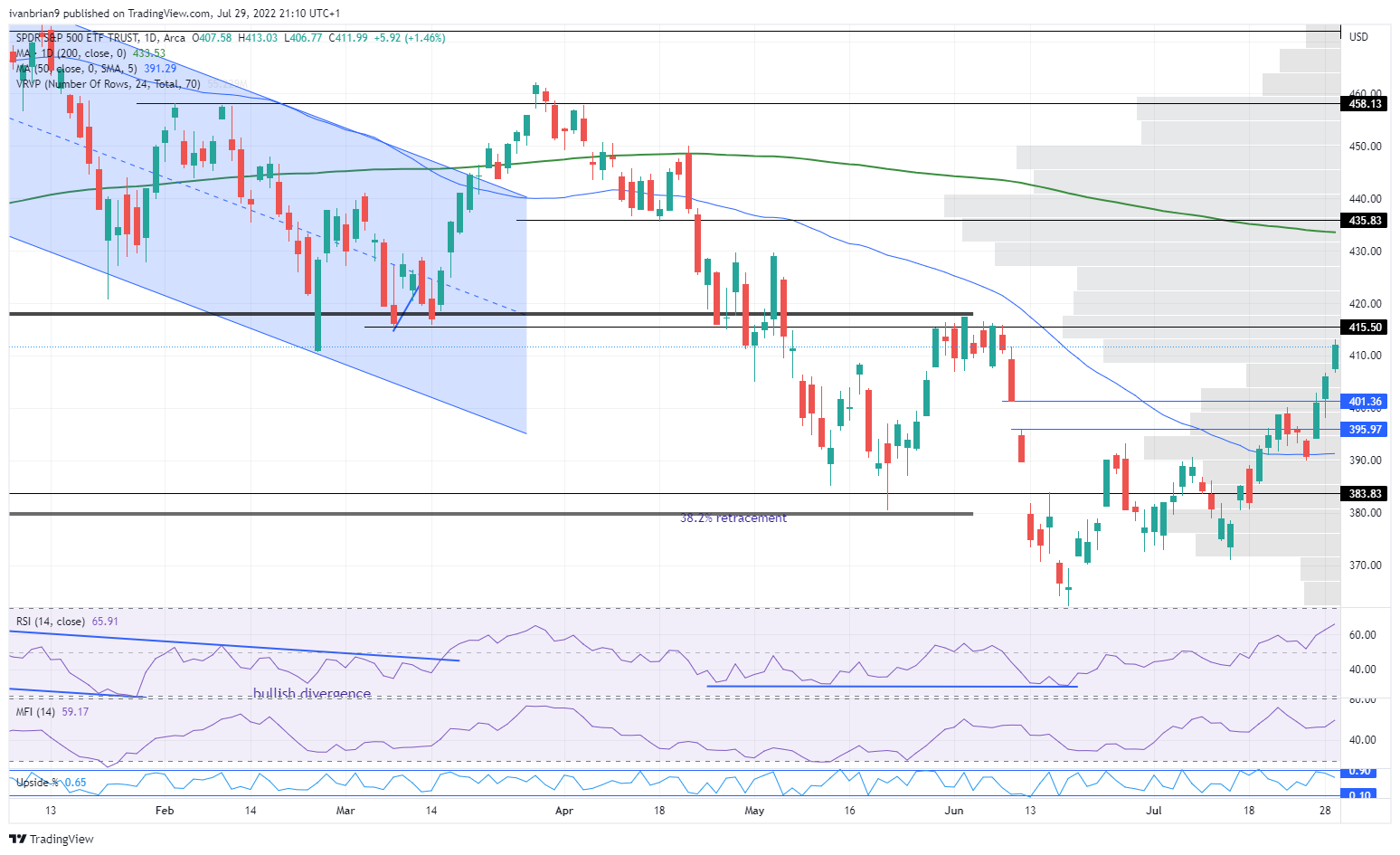 There isn’t too much data to disrupt this rally until Friday’s jobs report. The most recent weekly jobless claims data is starting to show signs of a slowing labor market, but last month’s jobs report was strong. That’s no surprise, as companies are finally catching up on vacancies and pent-up demand is cooling, slowing job growth. Expect the job market to slow at the end of the year. 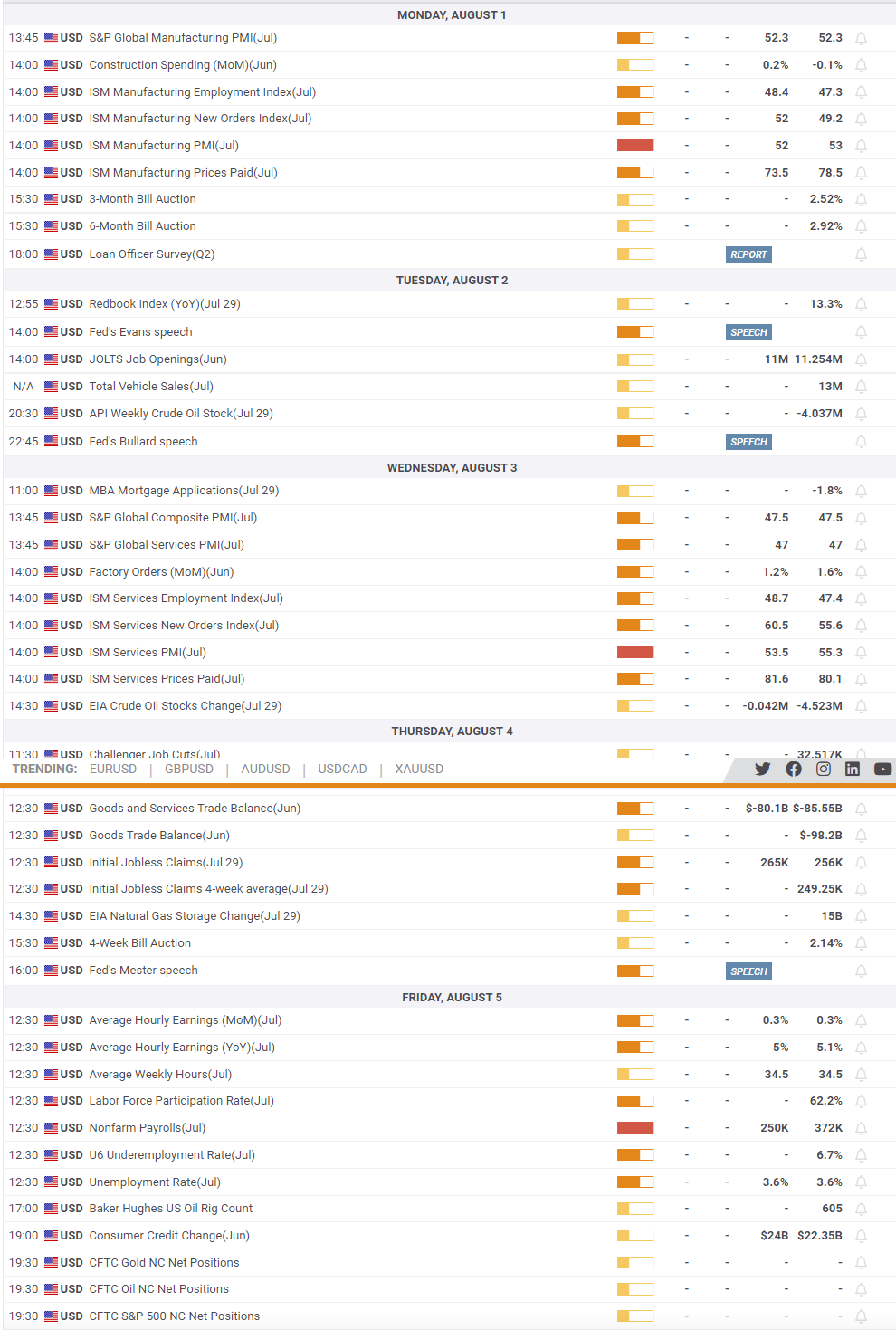